Did they inform the students? No. Did they tell the faculty? No. Did they tell the tuition paying and loan borrowing parents? No. AU  lost $91 million in a bet on interest rates and still faces additional losses of $76 million according to a report from the Roosevelt Institute and AU’s financial documents. The bet is technically a credit swap agreement with a bank, or a bet on the direction of interest rates. AU bet interest rates would rise; rates have stayed low for years.  As the Roosevelt Institute report below shows, AU was at the mercy of the bankers on its own Board of Trustees:

“American is also a good example of the powerful role that bankers often play at colleges and universities. Several members of the finance industry sit on American’s board, including high-level people at Goldman Sachs and
JPMorgan Chase. Some of these same financial companies are involved in American’s swap deals, as bond underwriters and/or swap counterparties.
For example, a high-level executive at Bank of America sat on the
board during the period that American entered into its two toxic swaps with Bank of America.” (see page 18 and page 23.)

DC Universities Continue to Exclude Service Workers from Classes. GU, GWU, Howard and UDC, You Should Be Ashamed. A Survey of Educational Benefits for Service Workers in the District of Columbia

Educational Opportunities for Service Workers in the District of Columbia

A slightly longer version of this survey was included in the American Friends Service Committee report on Human Rights in 2017. See pages 19-22 at https://www.afsc.org/sites/default/files/documents/HR%20City%20Report_2017_FINAL.pdf

April 15, 2019 Jim McCabe Leave a comment
Update. In September 2019, Ms. Williams completed her 53 year working in food service at AU. The file below is a year old.
Leila Williams 52 Years of Work and Can’t RetireDownload

Background: The Lives of Service Workers at American University

Ms. Leila Williams is 78 and has worked at AU for more than 51 years. She began work on campus in September, 1966. She says she can’t afford to retire. 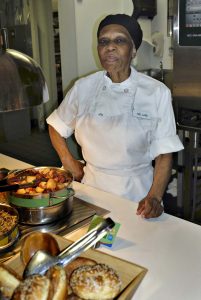 Colleagues, there are at least two aspects of the crisis the service workers face at AU.

Almost empty retirement accounts for service workers over 65. No contributions from Marriott for years. And uncertain retirements for younger workers.

The almost empty retirement accounts issue in more detail.
Marriott was the first vendor to supply food services to the university after
privatization in 1982. As you can see in this contract with Marriott no provision was made for retirement accounts. Not a penny was provided for workers’ retirements for the term of this contract. We were so stunned at seeing this absence of funds, that we asked a labor lawyer to review the contract assuming that we have missed something. We had not. There was no money in retirement for the workers. Obviously, the university saved money in 1982 by now having workers on campus to whom no retirement payments were being made.

What would it cost to remedy this situation of fifteen to twenty over
65-year old workers who can’t retire?
Please remember in addition to the empty years, approximately 1982-2005, with no retirement contributions, these workers also will receive small social security checks based on many years at or near the minimum wage. The union has identified 15 workers who need help in order to retire.

What is happening with younger service workers? Will the younger workers today ever be able to retire?
Aramark is making retirement contributions today unlike the practice of Marriott and other vendors in the past. In the current contract, Aramark provides $1.00 in retirement benefits for each hour worked during a year. So most of the cooks who only work 8 months a year or 32 weeks a year at 40 hours a week, or a total of 1280 hours of work would receive $1,280 per year in contributions to retirement accounts. This does not look like it will provide adequate retirement benefits for current workers. The cleaners who also work for Aramark are employed for the full year.

We urge the administration and the Board of Trustees to commission another
report from John Willougby or an equally skilled colleague to determine what
level of contribution from Aramark or the next vendor is needed. Of course, the
vendor would pass the cost along to the university which might involve
sacrifices on campus. Bonuses to senior executives might be reduced. Holiday
parties might have to be scaled back. Was the open bar paid for by American
University at this year’s American Political Science Association conference
really more important than adequate retirements for service workers?

Our sources.
We have provided as much detail as we know. Unfortunately, the HR department
at AU has nothing on its web site about the treatment of the service workers on
campus since 1982. And information in the university archives is incomplete. While there are articles from the Eagle about problems year after year in the 80s and 90s, there are no electronic copies of contracts between the vendors and the service workers. Current Aramark employees gave us the copies of the two contracts referred to on this web site. See the Library’s web site for archives of the Eagle. (Library web site>University Archives>Eagle)

Our conclusion
AU has the resources to treat everyone who works on campus ethically. It has
not done this since 1982. It could begin again if it chooses.